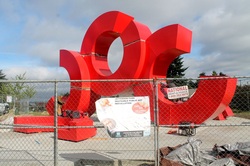 Oregon artist CJ Rench worked with professional skate boarder Torey Pudwill to develop a public sculpture that was designed for skateboarding. Located in Jefferson Park near the corner of Beacon Ave and Spokane St this highly visible sculpture is hard to miss. 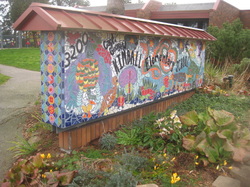 Julie has been busy on Beacon Hill working on a series of mosaics with students from various elementary schools like this one at Kimball Elementary School.  They are all fun and colorful additions to the neighborhood.

The owners of the building at 3210 Beacon Ave S have unearthed a vintage mural.  I hope they can find a way to preserve it.  I couldn't get far enough away to take a good photo so I sort of collaged several together, hopefully you get the idea. You can see a larger photo HERE

"Welcome to the Wheel World" by Ela Lamblin 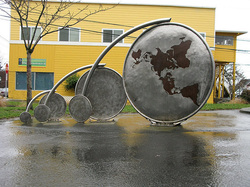 This steel sculpture is located in front of the Beacon Hill International School and seconds as a bike rack.  From their website "Lamblin's design symbolizes the global focus of our programs and supports our mission to provide an inclusive, equitable, engaging school culture." 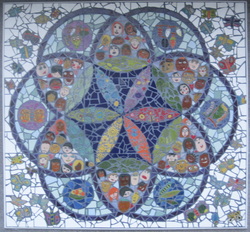 You might want to take some time and stop by Maple Elementary School to check out their new mosaics created under the direction of artist Julie Maher-Callen, and art teacher, Traci Hutain that were dedicated September 20, 2010.  These are very dynamic and well designed mosaics and worth going out of your way to check them out.  Make sure you find all three of them.

"Drawing the Land" by Elizabeth Conner 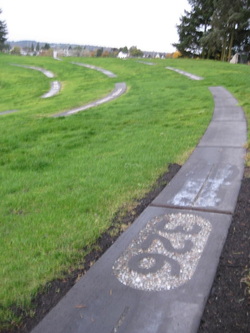 Drawing the Land is one of those public artworks that is not easy to pin down.  It's Beacon Hill's newest and probably largest public artwork but it's tricky to even say where it stops and starts.  It consists of a series of cement bands through the new Jefferson Park which are marked with elevations and a series of historical statements.  Clearly it looks at our historical manipulation of the land, but also how this area has passed through history with echos of the previous reservoir or even how the area was used by Japanese families before the war.
Perhaps the artist says it best in the area near the viewpoint along one of the cement bands 'The old reservoir is beneath your feet, and Puget Sound is before you.   A Park Opens to the View and to the Neighborhood' 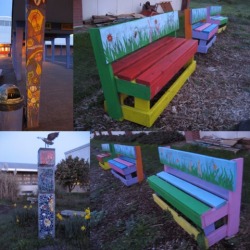 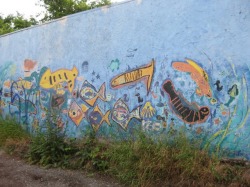 This great mural is on the back of a garage that is going to be destroyed as part of the new Findlay Church development.  I'm hoping that they will consider adding art as part of their new development to replace this great mural that we will be missing.  I've been contacted by the artist Kathleen McHugh and she writes  ' Dina McDermott and her husband lived in the house on the Bayview/14th corner. She and her husband had a dance company, Leaving Ground Dance, and she also taught at Spectrum. Dina was the main community organizer who made contact at local meetings with a community police team etc., Other artists, (another dancer, theater person musician and I) created loose fluxing associations with each other, other artists , and various other groups. We secured grant funding from United Way and did arts programming with the neighborhood kids based out of an apt at Lago Vista (now Westview-I think). Dina let the neighborhood youth and community police team paint on her garage. I coordinated and implemented the group outdoor mural project.' 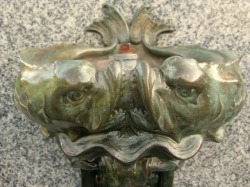 I don't really know what this fountain by Max P. Nielson is called, but it is located out in front of the golf house in Jefferson Park where it is dedicated to Sherwood Gilespie .  There is a sculpture of a golfer on top of it and it is dated 1915.

According to Jim Rupp from the board from the Museum of History and Industry Seattle's oldest public art is from 1909.  Since this sculpture was dedicated only a few years after that it's kind of cool that we have one of the oldest pieces of public art in the city!

I wish that the city would get the fountain part working again as part of the Jefferson Park improvements. 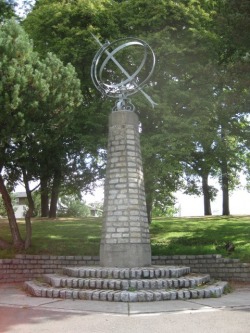 Imagine if you will, this monolithic sculpture having flames shooting out of the top and serving as a beacon for the children that would play in the local orchard.  Evidently this was once a common type of monument when it was donated by a garden society in the 1940's.  Located in Van Asselt park I really want to see this Flambeau restored to it's former glory with flames shooting out of the middle.  I ran across this info on a scan of some old hand written notes by a former city employee. 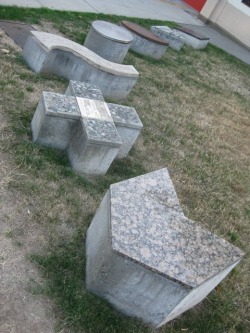 You may not know it, but in front of the fire station on the corner of Spokane and Beacon is a sculpture created by artist Ellen Ziegler worked with architect Mervin Gorasht on Station No. 13,  she created
seven small blocks of varied forms and materials -- concrete, stainless steel, sandstone, Cor-Ten, and terrazzo.
The blocks have inlaid bronze letters calling out a Japanese folktale about self-sacrifice and a community coming together to fight a fire, and are placed in the lawn in front of the station.  It's actually a pretty interesting story but I'm not going to give you any details here...you need to go read it. 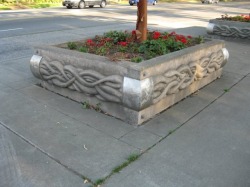 Located in front of the fire station these planters were created by Beacon Hill artist Glenn Herlihy in 1999 with a grant from the Seattle Arts Commission. They symbolize the web and flow of water through our city pipes.  One of the cool things about this piece is that the cement is actually dyed different colors in the three different planters. 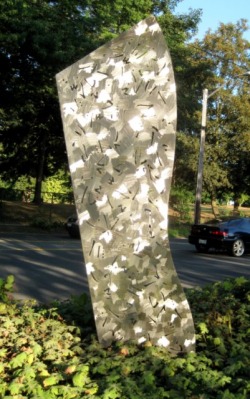 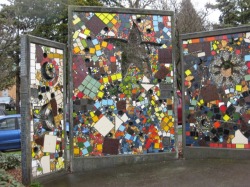 This color explosion is located in Jose Rizal park and was created by late Seattle University professor Val Liago to commemorate this park.  While you are there check out the bust of Philippine national hero Jose Rizal by Anastacio Caedo that the park is named after.

The Legend of Stone and Bird 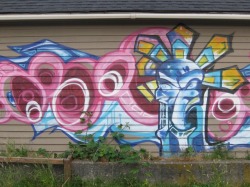 This mural is located on the side of a garage behind Victrola Coffee and was also created by muralist collective Matamuros. 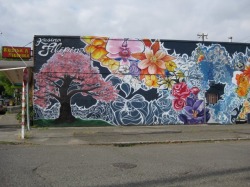 This is one of the bolder artworks on the hill and was awareded 'best new neighborhood mural' by the Seattle Weekly in 2008, kudos to Kusina Filipina Restaurant for doing something so cool.  Created by a muralist group named Matamuros in 2008, you can see images of it being created here. 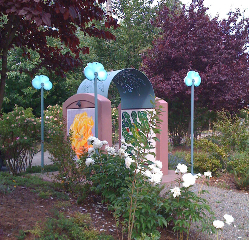 This shelter is in located on the corner of Beacon Ave and Myrtle Street and was created in 2003 Artist Cheryll Leo-Gwin who grew up on Beacon Hill. Contracted by Metro,  she created the "Shrine of Hopes and Wishes" based on her own dreams  as a child while taking the bus to school and later to work at the  University. She wants the piece to inspire the Beacon Hill residents to go after their own dreams when they take shelter in the shrine or just pass by. 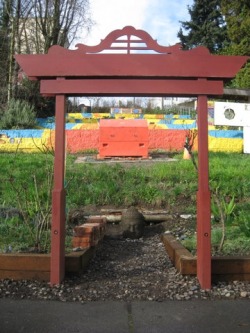 When does a P-Patch cross the line and become an artwork?  I'm not exactly sure, but this P-Patch has definitely crossed that line.  It is a rainbow of community goodness and a little treasure located on North Beacon Hill.

Many Threads, One Spool 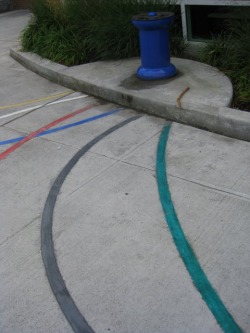 'Many Threads, One Spool' is located at 2820 S. Myrtle Street at the Van Asselt Community Center.  Created by artist AJ Power it represents the many different types of people that it takes to make up a community. 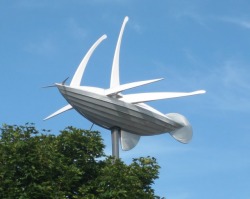 No, you are not dreaming.  This sculpture actually does move and the sails change position according the winds.  Created by artist Miles Addison Pepper The Dream Ship "Beacon Hill Discovery" was created in 2005 and floats dreamily over the Beacon Hill Library. 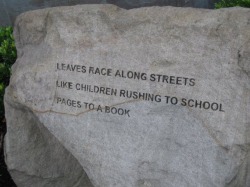 The Beacon Hill Library is surrounded by rocks with poetry carved into them.  According to the libraries website 'Haiku writers selected were: Stephanie Cerezo, Spring; Xiu Vinh Mao, Summer; Craig Thompson, Fall; and Kathleen Craig, Winter. Stephanie and Vinh were in third grade at Beacon Hill Elementary School when their submissions were selected.' 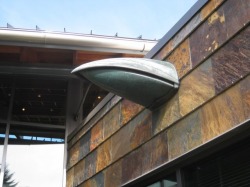 Also created in 2005 by Miles Addison Pepper for the library are 'Ravens Bill Downspouts'.  These spout save up rain water and when they are full enough they dump them on the landscape below.  What cool artwork our library has!

One of those somber artworks that keeps me awake at night sometimes.  If good art is artwork that inspires us to think than the 1995 'Equality' by Ken Ledback & Rolon Bert Garner is really good art.  A cluster of similar cement homes is crammed together at Sturgis Park in North Beacon Hill.

Keep Calm and Carry On 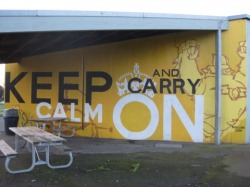 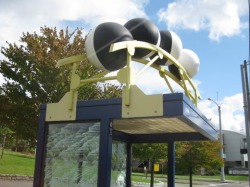 I just heard from Dale Cummings at King County Metro Transit, he writes
"These two shelter commissioned artworks were created by Stuart Keeler and Michael Machnic in 2000. The commission was funded by the Seattle Arts Commission, with in kind support and coordination provided by Metro
Transit. The theme relates to the phases of the moon.'

Flight of the Bumblebee 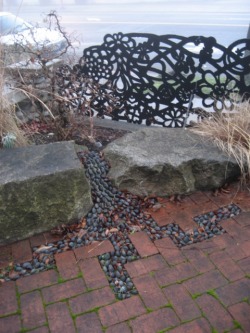 Brandon Zebold's fence 'Flight of the Bumblebee' and Glenn Herlihy's rock work can be seen at 2524 Beacon Ave. S. 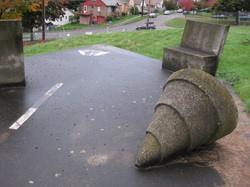 This sculpture is located in Jefferson Park near the viewpoint and was created by artist Mark Lere in 1986.  It is made up of a series of cement shapes and benches but it is currently within the construction zone and surrounded by orange construction barrier.  I'm looking forward to the park reopening so I can go check it out.
I was just informed by one of our neighbors that this is actually one 'piece' of a bigger sculpture that is scattered throughout the city.  It sounds like part of it is even located on Harbor Island.  Further research reveals that if you draw a line between the various sculptures it reveals the shape of a boat, so you actually need to travel all over the city to see the whole sculpture.

Paul Horiuchi was a very important figure in the development of north west art.   Which according to history link 'renowned for the Zen-like spontaneity of his collage paintings, along with an abstract expressionist command of flat space. The layered paintings carry overtones of fragmented messages, of memories eroded by time. Torn edges suggest wounding and loss.'
Although they won't let me take any photos of it, the Bank of America branch has an excellent example by this important figure hanging in their branch.  Take a minute to check it out next time your banking.