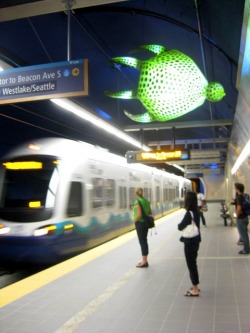 Let's be honest for a moment?  Is it just me or does Beacon Hill have the best light rail station in the whole line?  This is only capped off by having these out of this world Space Form art by Seattle artist Dan Corson.  But are these giant space creatures?  Or are we just little tiny people floating in a sea of giant cells? 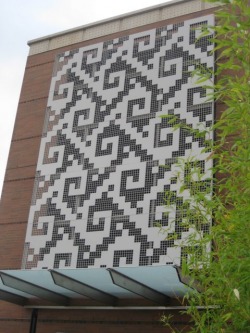 Seattle artist Carl Smool created much of the artwork around Beacon Hill's light rail station based on textile patterns around the world that were donated by the Beacon Hill Community.  The artwork is not only the patterns on the side of the building shown here, but the 'carpet' patterns formed near the entrance and the colorful metal 'flags' that are posted in front of the station. 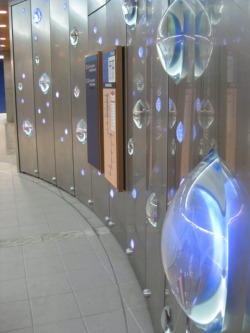 You might feel like you are under a microscope swimming with the ameba when you reach the bottom the elevator shaft at Beacon Hill's light rail station.  That is because Seattle artist Dan Corson created these images 'looking at a collection of nematodes magnified straight from the soil surrounding the underground station' according to Sound Transits website. 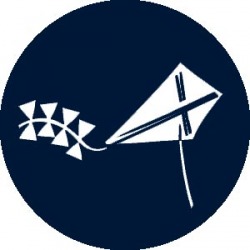 Seattle Artist Christian French developed the pictogram system that is used throughout the system to identify the different neighborhoods.  Christian wrote me to say 'The pictograms are based on the design that points-of-interest in the neighborhood make when connected together. The kite is a reference also to the picnics that used to happen in a park on top of Beacon Hill, particularly by the Japanese-American community, before WWII.'

If your lucky you might also ride a train with Christian's alter ego Transit Man!

Bus Shelter in front of Station 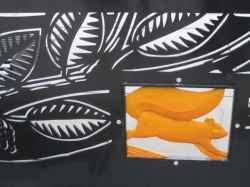 The bus shelter in front of the station was designed by artist Steven Gardner.  Eventually these will be located along the entire light rail system.  If you look closely at the top section, that is a little dial which points to a pictogram that let's you know which station you are at and which one is coming next.  Check it out. 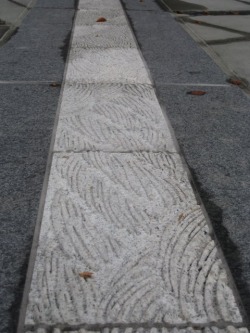 I just heard from Jennifer Babuca at Sound Transit about this artwork, 'Norie Sato developed the systemwide braid pattern found at stations, which is part of the tactile wayfinding system.  The rope pattern offers a textured strip that helps lead patrons with site impairments to find navigate their way to the platform and train waiting areas.

Norie also developed a sculpture that will be added later this year to the entrances of the stations.  It will be an abstract representation of the rope pulling out of the ground plane and will serve as a marker to the station entrances.  The first one has been installed at Mount Baker Station.' 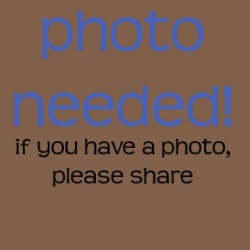 If you have been looking out the window of the train as it goes down the tunnel, you may think that you are seeing things if images of playing cards pop into your head.  But actually this is an artwork/optical illusion created by artist Bill Bell.  They only flash for 1/30th of a second so don't blink or you will miss them.